It’s been sixteen years since I’ve seen my friend Bessie’s cousin, Bessie, but I had the chance to catch up with her this weekend. After her own stint in Paris, she’s living in Switzerland and came to town to visit friends do a little shopping. With a plan for lunch, I suggested that we meet at the salon de thé at Jean-Paul Hevin.

We were modest and French enough with our meals—quiche for Bessie, salad for me, wine for us both. Less so with dessert. It’s a chocolatier, after all—my favorite one at that. We had to have chocolate cake.

For all its poshness, the salon has these weird oversized, laminated menus with pictures and descriptions of the cakes on it—like something you’d see at a carnival. But they were admittedly helpful in narrowing down the selection. From the 30+ varieties of cakes—most of them chocolate-based—Bes chose the Choco Passion, and I went classic with a Chocolat Framboise.

My chocolate-raspberry cake was gorgeous. Layers of fluffy chocolate mousse and dense chocolate cake rested atop a cacao biscuit and beneath a layer of raspberry preserves. But for all its beauty, it lacked that famous je ne sais quoi. It had nothing on Bessie’s Choco Passion. 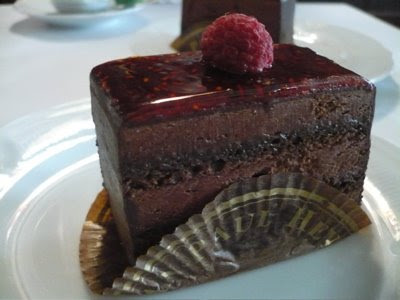 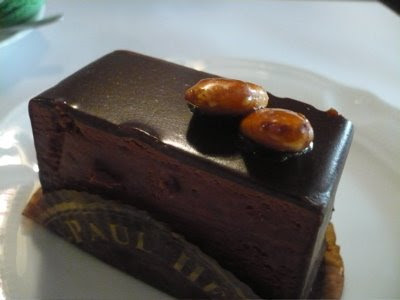 The Choco Passion was rich and complex, nutty and fruity. A flakey praline base and dark chocolate ganache made for a thick, savory base that was offset with chocolate mousse whipped with tart passionfruit. It had so much depth and was so irresistible, I just wanted to keep sneaking bites of Bessie’s cake. But I figured that wasn’t very French of me.
Posted by Amy Thomas at 4:08 PM