According to a friend in Paris. 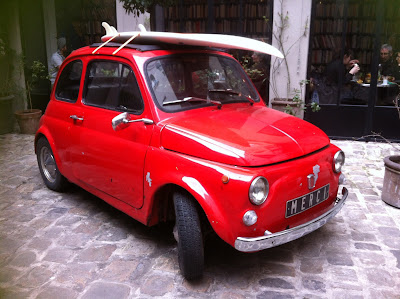 Envisioned by Wes Anderson and Roman Coppola. So brilliant. So delicious. So makes me want more! Start with episode 1.

And until the final installment is out, you can watch all three together here.
Posted by Amy Thomas at 8:38 PM 4 comments:

Three years ago, I did this

I did it. Today was Pierre Hermé’s Jour du Macaron, and, oui, mesdames et messieurs, I did the full circuit. I could have returned chez-moi with a ridiculous cache of 53 macarons. But because I’m a woman of restraint, and I came home with only 47. Actually, 43, since I ate four along the way.

So the premise of le Jour du Macaron is you can go to any one of Pierre Hermé’s six boutiques in the city, and get three free macarons of your choice. (While there, you’re encouraged to drop some coins into a box for a couple different charities—a very nice gesture.) But if you go to all six boutiques, and get a card stamped to prove it, you’re rewarded with a box of 35 macarons. What does one girl do with 35 macarons, much less 53?! Well, I’m eating as I type, for one thing…

I intended to do something like the Tour du Chocolat and Velib to all six boutiques. But they’re spread pretty well across the city so I alternated between bike, foot and Metro.

At 10:15, the madness began. There was already a line out the door of the rue Bonaparte location, having just opened at 10. 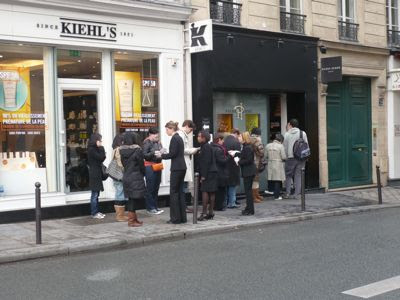 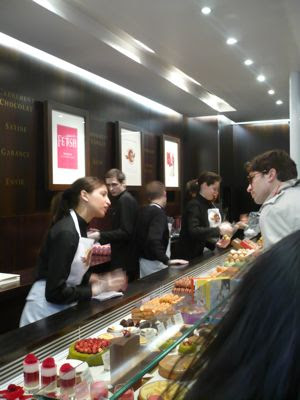 I started there because I knew it would be the craziest, being Hermé’s first boutique and being in Saint-Germaine. But after a relatively swift move through the line, I got my three: milk chocolate and Earl Grey tea, vanilla and le Magnifique: raspberry and wasabi. 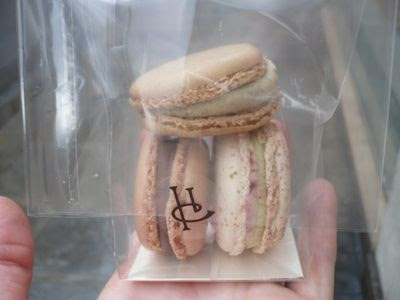 Yes, they are as delicious as they sound.

Then I pedaled onto the rue Vaugirard location. Not as crazy, not at all. My three choices? 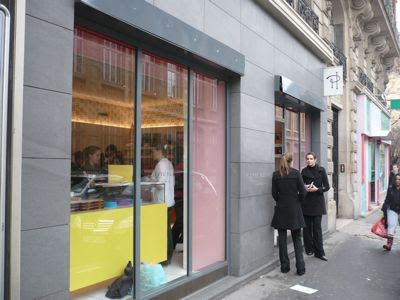 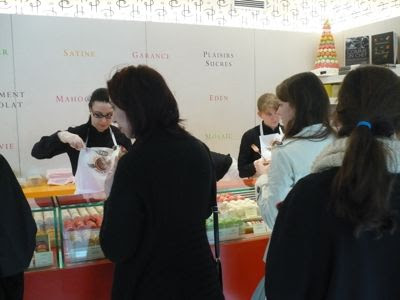 Pistachio, caramel and an unbelievable mélange of peach, apricot and saffron. 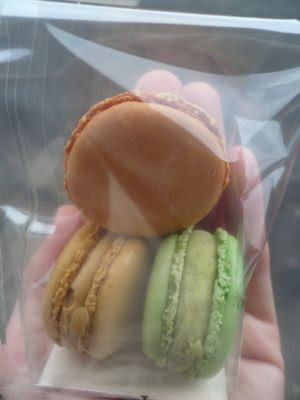 A few metro stops later, I was in the 16th arrondisement, at avenue Paul Doumer. 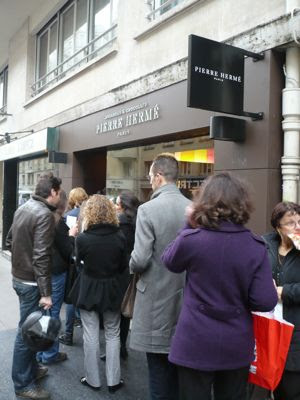 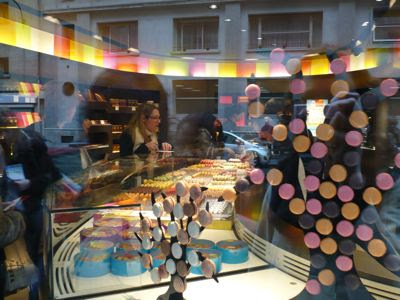 There, I scooped up chocolate, the mind-bending white truffle and hazelnut and apricot and pistachio. 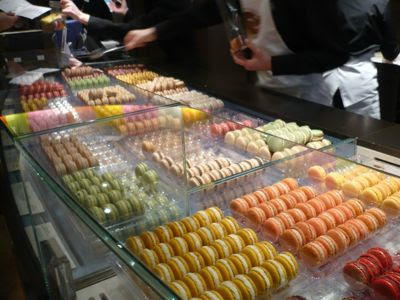 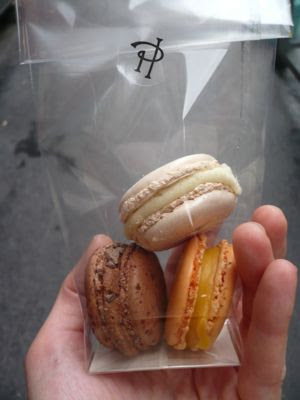 At Publicis Drugstore, my fourth location, there was a pretty serious line and the employees were coming through it to stamp cards. Once my stamp was added, I decided to save myself the 10-minute wait in line and forgo those three free macarons. Really. How gluttonous can one be? 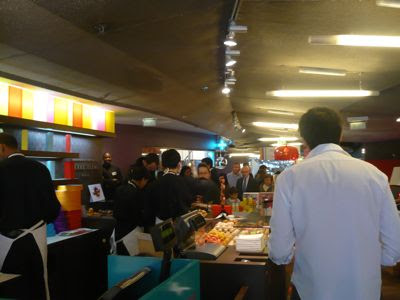 The next stretch of the circuit was fun as it took me on my old commute from the Champs-Elysée down to the first arrondisement. I pulled right up to the Velib station in front of the rue Cambon location and hopped in line. 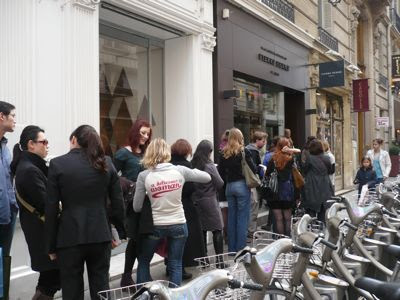 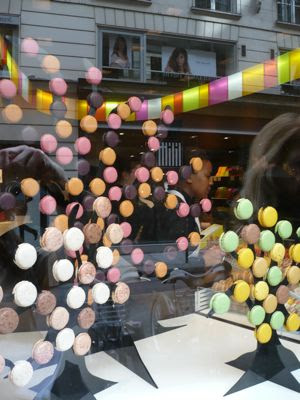 By now, it was after noon and the waits were taking awhile. But I figured I was still on target to finish by 2. 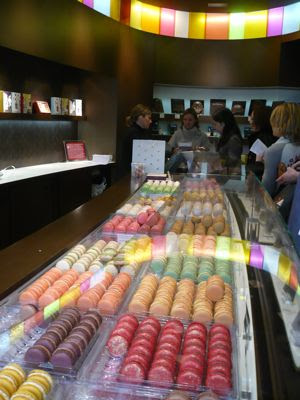 I got my card stamped, excited that I had just one more stop, and ordered up the Médélice, lemon and hazelnut praliné; Fragola, raspberry and balsamic vinegar; and the much-acclaimed olive oil and vanilla. Trust me, it’s delicious.

I left the Galeries Lafayette location to last, which was a mistake: it was the craziest scene. I stood in line for 45 minutes, hungry for proper nourishment, having only eaten a banana and another macaron. I was anxious to have the circuit done. Still on track for my 2pm goal, but I hate waiting for food. 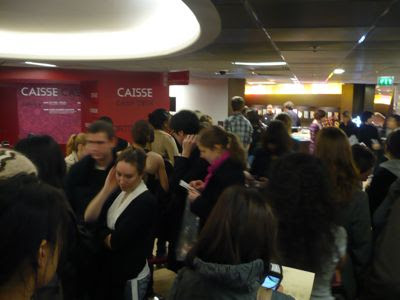 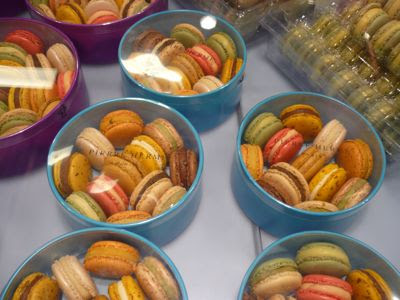 Finally, I got up to the counter and surprised the guy when I told him I’d skip the three freebies and just get to my free boite.

Have you ever created your own assortment of 35 macaron flavors? It was crazy. I just kept ordering more and more. And more. 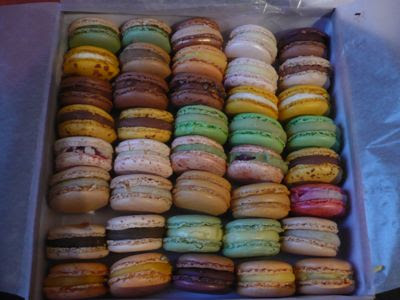 I have to find out how many macarons they went through today.
Posted by Amy Thomas at 8:33 AM 16 comments: 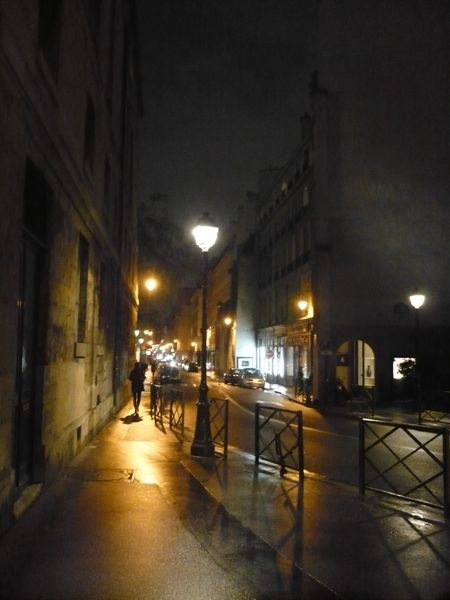 Email ThisBlogThis!Share to TwitterShare to FacebookShare to Pinterest
Labels: Beauty, Just Because

The days go by too quickly. From Sunday night, when I’m trying to jam in 11 things I neglected to do all weekend, to Wednesday morning spin class, to any old sugar-infused pick-me-up on a workday afternoon, I’m always wondering: how is it that I accomplish less and less the older I get? Why can’t I get more done on any given day?

I just feel like I waste so much time trying to figure out my shoes or jewelry in the morning. Or blindly roaming Whole Foods, trying to find a fast, easy dinner that is going to nourish me on both a health and guilty pleasure level. So by mapping these things out, I’m hoping I feel more in control, can eke out a few more minutes of precious time each day, and then… 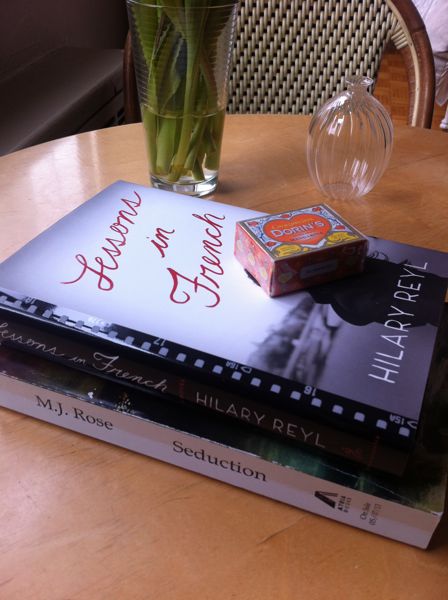 … indulge in things that are truly nourishing. Like reading. Petting Milo. Catching up with friends on the telephone (remember that archaic device??). And just… thinking.

Email ThisBlogThis!Share to TwitterShare to FacebookShare to Pinterest
Labels: Just Because